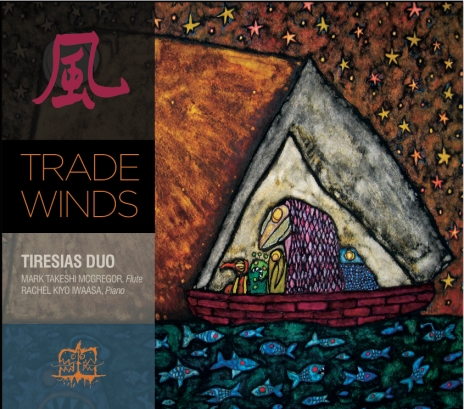 As many people know, when pianist Rachel Iwaasa and I activate our Wonder-Twin powers we magically transform into our flute-piano duo, Tiresias. Back in the summer of 2008, Rachel and I, still basking in the glow of our first album, Delicate Fires, decided it was time to start work on a new CD.

All I can say is: wow, time flies.

Today — almost five years later — the CD stork (disguised cunningly in a brown UPS outfit) dropped off a box full of sleek little packages containing our new recording, Trade Winds. One of the nice things about taking five years to make a CD is that you have time to record a lot of music — in fact, Trade Winds is so freaking huge we had to make it a double album! That’s right, there are two discs: one recorded in 2008 at the UBC Recital Hall in Vancouver, the other in 2012 at the Banff Centre for the Arts. Disc One explores the musical ties between Canada and Japan — a theme that Rachel and I have great affection for, given that we’re both Hapa (a mixture of Japanese and Western heritage). This cultural exchange is explored from a number of angles: Japanese composers with ties to Canada, Canadian composers of Japanese lineage, and Canadian composers of Western heritage who had been influenced by some aspect of Japanese culture. Works on this disc include staples of the 20th century flute/piano repertoire by Toru Takemitsu and Jo Kondo, as well as new and recent works by Canadian composers Kara Gibbs, Elliot Weisgarber, Anthony Genge, Hiroki Tsurumoto, and Derek Charke. Disc Two showcases the music of three generations of West Coast Canadian composers: Jean Coulthard, Paul M. Douglas, and Christopher Kovarik. These works continue in the vein of Brahms, Mahler, and Debussy, reveling in lush harmonic tapestries and unabashed lyricism. Both programmes are incredibly diverse, ranging from the dissonant savagery of Derek Charke’s Distant Voices to the virtuosic post-Romanticism of Christopher Kovarik’s Sonata for Flute and Piano to the Asian-inflected melodies of Elliot Weisgarber and Paul M. Douglas. And all of it encased in a beautiful package designed by Simon Butler at Thinksavvy Designs (Simon, you continue to rock my world). None of this could have happened without the incredible skill and patience of our recording technicians, Emma Laín, Zana Corbett, and David Simpson, as well as the generous financial support of the Canada Council for the Arts, the UBC School of Music, and the National Association of Japanese Canadians. Trade Winds is released on Redshift Records. I’ll be posting again soon about our CD launch concert, but in the meantime here are some images from the CD jacket and booklet design (photos by SD Holman and Jack McKeown), as well as some Soundcloud snippets of select tracks — enjoy! 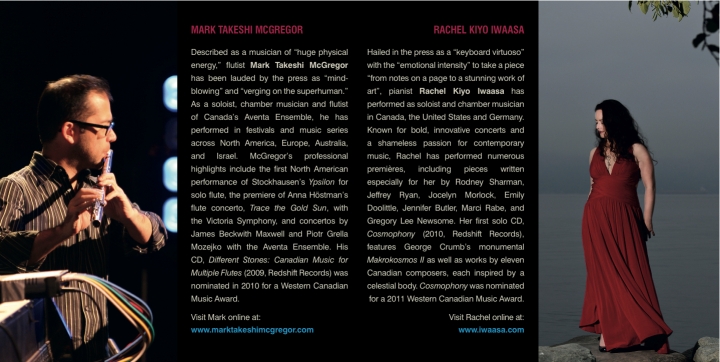 “Energetically” from Untitled Scenes: Two Remembered and One Imagined by Kara Gibbs:

“Misty Evening at Saga” from Miyako Sketches by Elliot Weisgarber:

My Auntie Shizu turned 80 in January but celebrations were postponed because of omicron. Part of these festivities was a specially commissioned song by @mlokbitis, set to text by Joy Kogawa — and last night we finally got to premiere it for my aunt, her husband Ron, and friends and family. Jocelyn created such an achingly beautiful setting for Kogawa’s bittersweet text, and @sarahjokirsch and Adrian Verdejo were the perfect musical accomplices. And thanks to @david.pay and @musiconmain for making this song a reality. Hashtags like #gratitude make me gag a bit, but, like, yeah… gratitude.
Moncton appreciation post #2: no trip to Moncton would be complete without a visit to @larouerechocolat! Also, another random bunny photo, just because.
Moncton appreciation post #1: André, Robin, and Léandre; recording one of my favourite pieces in the basement of Chez Streb-Cormier with one of the weirdest looking microphones ever; and Georgia the bunny, who quickly learned that when it came to acquiring treats, I was easily the weakest link in the house.