We all have moments that define our lives. For me, one of those moments is hearing Arnold Schoenberg’s Pierrot Lunaire for the first time. I was seventeen when I first heard it performed by the Little Chamber Music Series That Could, conducted by the late and great Wallace Leung. I know statements like “it changed my life forever” are overused…. but seriously, it changed my life forever. I was haunted by it for months after. I couldn’t believe something so psychologically twisted could be so luminously beautiful. I was even reassured by it — all that internal psychobabble that we’re so afraid to admit to in public, it was all there. I often say Pierrot is one of my favourite pieces of music from the 20th century, but that’s not entirely fair: it’s one of my favourite pieces ever.

I’ve been fortunate to have played this piece on numerous occasions: in Victoria, in Prince George, in Montreal, in Vancouver for my DMA degree, and even once in Switzerland alongside an all-star cast that included Stephen Isserlis, Dmitry Sitkovetsky, Sharon Kam, Kent Nagano, and the Icelandic pop sensation Björk (an event that remains one of the more bizarre experiences of my life). But these next couple of days are truly special: I’m honoured to perform Pierrot Lunaire with an amazing roster of musicians: Robyn Klassen (soprano), Cris Inguanti (clarinet), David Gillham (violin), Marcus Takizawa (viola), Ariel Barnes (cello), Corey Hamm (piano), and Marguerite Witvoet (conductor). The energy in this group is unbelievable: this is a Pierrot that is vital, throbbing, passionate, and so, so incredibly dark and twisted.

For anyone who isn’t familiar with the world of Pierrot: Pierrot Lunaire Op. 21 was written by Arnold Schoenberg in 1912 for singer/actress and chamber ensemble. The poetry is by Albert Giraud (translated into German by Otto Erich Hartleben). Schoenberg selected twenty-one of these poems and set them to music; they remain some of the eeriest, cleverest, most beautiful stuff ever written. This half-hour song cycle describes the antics of Pierrot, a sadistic clown from the Commedia dell’ arte, drunk on moonlight, carrying out the most outrageous antics: at one point he grabs his friend Cassander and plays him as though he were a giant viola; another time he is convinced that he will be decapitated by the sickle-shaped moon; elsewhere he captures the hapless Cassander, drills a hole in his head(!), stuffs it full of Turkish tobacco and smokes him like a pipe. Seriously, you can’t make this stuff up — well, unless you’re Giraud.

In order to pull Pierrot off, you need an exceptional singer. And I’m so thrilled that we’re working with the incredible Robyn Klassen (yes, she’s better than Björk. Like, way better). Robyn perfectly captures the demented side of Pierrot while still imbuing him with heartbreaking humanity. In fact, it’s a little unsettling how easily she slips into the Pierrot psyche. Just sayin’…

Pierrot Lunaire is presented by those monsters at Music on Main, who continue to provide Vancouver with some of the most innovative programming ever. Come join us at the Western Front either Monday the 15th or Tuesday the 16th, grab a drink at the bar, and hear one of the greatest, darkest, most beautiful masterpieces of the 20th century. 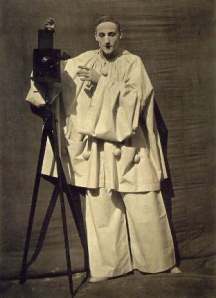