I’m proud to be a member of Aventa, a Victoria-based new music ensemble directed by Bill Linwood. Over the last few years I’ve had the privilege of performing dozens of concerts around the world alongside these fabulous musicians, and rubbing elbows with some of the most spectacular composers of our time.

Aventa will perform on Friday, 3 February 2012, as part of the Victoria Symphony’s 2012 New Music Festival. The programme includes Living Toys by Thomas Adès, an incredibly colourful and virtuosic work for chamber orchestra, The Human Condition by Canadian composer Anthony Genge, and Eight Irish Madrigals by Gavin Bryars, which also features soprano Anne Grimm and tenor Benjamin Butterfield. Bryars, who shot to international stardom with his works The Sinking of the Titanic and Jesus’ Blood Never Failed Me Yet, will be in attendance at the festival — and he’ll be performing the double bass with Aventa in his own work! Read more about the event here 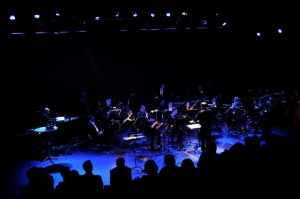 Business meeting. Very serious.
My first week at @queerarts! Lots of meetings, lots of (grant)writing, lots of emails, and lots of learning. But I’m excited and super grateful for the support and generosity of @sdholman, the fabulousness of QAF staff Lalia, Mirim, and Ben, and to my proximity to @paulwongprojects — who is a whirlwind of ideas and inspiration, whenever he sets foot in the room.
Toward The Sea by Takemitsu has to be one of my favourite works for flute and guitar: murky, moody, Debussean (that’s a legit word, right?). Adrian Verdejo and I had the opportunity to record this piece for @vicorchestra’s online Global Soundscapes festival, which was just released — you’ll find the link in my profile. The festival also includes lots of fantastic performances, including a great set by @allegrachambero with @melody.courage!